Armen Ter-Sarkisyan: «New Trends and Realities in «The Large Middle East Program»: Kurdish Referendum in Iraq and the Armenian Question» 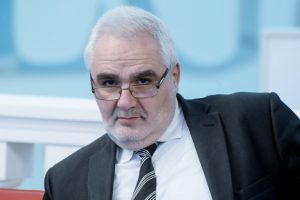 The so-called political program of the West  «Greater Middle East» has been used for almost 30 years. Publications, maps and articles on this issue provide an opportunity to get an idea that in the course of implementing this program, in future, the fragmentation of existing states in the region and the emergence of new national, religious and state entities are expected.

At the same time, of course, they talk a lot about the rights of indigenous peoples and ethno-confessional minorities. Moreover, steps are being taken to implement these rights, as well as to ensure their legitimacy. One of such steps is the organization and holding the referendum on the independence of the Kurds of the Northern Iraq on September 25, 2017.

This referendum, as well as the rights of indigenous peoples and ethno-confessional minorities in the region, are not purely local issues. They concern everyone.

Therefore, the natural question arises: how will the future of the Armenians, Kurds, Assyrians, Alevites, Turks and other peoples be in the context of the above mentioned program and what is the final settlement of the region’s problems in case such key decision is generally possible to find in the foreseeable future?

In this aspect, apparently two processes are possible to launch:

Here it is appropriate to recall that the rights of the Armenian people were recognized as early as 1918-1920, but up to this day they have not been realized. Therefore, it would be natural if parallel to the themes put into circulation today, the issue of the rights granted to the Armenian people would become a matter of discussion.

It is worth mentioning that according to the decision of the Armenian Question in 1918-20, the relevant resolutions have already been adopted, including: Decree of the Government of the Russian Federation (SNK) «On Turkish Armenia» («On Western Armenia», January 11, 1918); the signing of the Treaty of Sevres (August 10, 1920); Arbitral decision of the 28th US President Woodrow Wilson concerning the borders between Armenia and Turkey (November 22, 1920).

The Sevres Peace Treaty provided autonomy for Kurdistan, and defined the boundaries of the autonomy, as stated in the  Article 62 of the treaty: «A commission sitting in Constantinople and consisting of three members appointed by the governments of Britain, France and Italy respectively, within six months of entry by virtue of this Treaty, drafts a local autonomy for the Kurdish areas predominantly, located to the east of the Euphrates, south of the southern border of Armenia … and to the north of the Turkish border with Syria and Mesopotamia and. … This project must provide full guarantees for the protection of the Assyrian and Chaldean and other racial or religious minorities in these areas …».

Consequently, it can be stated that the future of the Armenian people is connected with the final and complete settlement of the Armenian Question, including the establishment of the Republic of Western Armenia in Western Armenia. The future of the Kurds lies in the final arrangement of the Kurdish issue in accordance with the articles of the Treaty of Sevres. The future of modern Turkey is directly related to the final settlement of two problems mentioned above. For Turkey, the process of resolving of the Armenian Question and realizing the rights of the Kurds in accordance with the articles of the Treaty of Sevres is indisputable, and these civilized processes will undoubtedly have a beneficial effect on all the peoples living in the region.

Kemalists having chosen the democratic way of development of Turkey in the 1920s, achieved some successes in the economic and political development of the state. However, this option can no longer work and develop itself, because, on the one hand, it is directly linked to the new political and civil processes in Turkey, and on the other hand, to the Armenian Question, which remains unresolved for several centuries in the country and in the region, and also in parallel – with the Kurdish issue.

It turns out that Turkey, even with the strongest desire from both sides, can join neither the European nor the Eurasian integration processes, since in both cases two unresolved issues mentioned above will be decisive. So the aspiration to get around these two problems and the programs of such a bypassing are actually programs to prevent the development of the Middle East and Turkey. As we have already noted, the Constitutional Court of France acted in this way when it obstructed the approval of the bill on the criminalization of the denial of the Armenian Genocide in Ottoman Turkey, thereby blocking one more opportunity of Turkey’s development.

There is no alternative to civilized development and there it cannot be.

This applies to Armenia, Kurds, Turkey, and the entire Middle East in general. The earlier the opposite parties understand and accept the essence of the problem, the less the peoples of the region will suffer.

The President of the National Assembly (Parliament) of Western Armenia