KOCHARI Armenian victory dance at the walls of the Reichstag on May 9, 1945 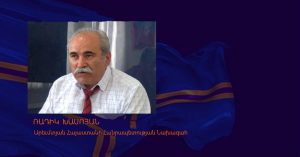 After the end of the First World War, at the Paris Peace Conference from January 18, 1919 to January 21, 1920, treaties were prepared, which were subsequently signed by the states that won the war along with the defeated states.

This treaty system was called the Versailles-Washington system.

The Versailles-Washington system of treaties was based on the Versailles, Saint-Germain, Neyisk, Trianon, Sevres treaties and the Washington Conference, on the agreement signed there on the Far East region.

The Treaty of Versailles was signed on June 28, 1919, on the one hand, by Germany, and on the other, by the victorious countries and their allies: the United States of America, Great Britain, France, Italy, Japan, Belgium, Brazil, Cuba, Bolivia, Ecuador, Greece, Guatemala, Haiti, Hijaz, Honduras, Liberia, Panama, Peru, Nicaragua, Poland, Portugal, Romania, the Kingdom of Serbia, Croatia and Slovenia and Uruguay.

The Peace Treaty of Saint-Germain-en-Laye was signed on September 10, 1919 between Austria, on the one hand, and the victorious countries and their allies, on the other.

Treaty of Neuilly-sur-Seine was signed on November 27, 1919 between Bulgaria, on the one hand, and the victorious countries and their allies, on the other.

The Treaty of Trianon was signed on June 4, 1920 between Hungary, on the one hand, and the victorious countries and their allies, on the other.

The Treaty of Sèvres was signed on August 10, 1920, on the one hand, by the government of the Ottoman Empire, and on the other, by Great Britain, France, Italy, Japan, Belgium, Greece, Poland, Portugal, Romania, Armenia, Czecho-Slovakia, Hijaz, and the Kingdom of Serbs, Croats and Slovenes.

The signing of the Sevres Treaty was preceded by the following fact: on May 11, 2010, the Turkish delegation was invited to the Paris Peace Conference, where it was presented the “Conditions of Peace”. Among the Allied Powers was also a Delegation of the Armenian state. In the preamble to the «Conditions of Peace», which later became the preamble of the Treaty of Sevres, Armenia was included in the list of Allied states.

Thus, the independence of the State of Armenia was recognized de jure on May 11, 1920, and in 2020 marks the 100th anniversary of the recognition of independence.

Articles 89-93 of Section VI “Armenia” of the Sevres Peace Treaty enshrined the decisions adopted in 1919-1920 regarding the rights of the Armenian people, and their basic principles.

Some important points regarding the Treaty of Sevres.

First. All those who think that the Sevres Peace Treaty has not entered into force because it was allegedly not ratified should then also admit that the current borders of the countries of the Greater Middle East are illegal.

Second. The requirements of the Sevres Peace Treaty were not fulfilled in only two aspects:

Third. In the region of the Greater Middle East, it is impossible to establish a durable and long lasting peace without fulfillment with the requirements and articles of the Sevres Peace Treaty relating to Armenia and Kurdistan, as well as without implementation of the Arbitral Award of the 28th President of the United States of America Woodrow Wilson.

President of the Republic of Western Armenia (Armenia)

****
Translated into English by Vagan Babakhanyan